Seeing in Color: Two Takes on Race and Adoption

By Lisa at Pack of Three for Adopt-a-tude


This past September, I attended a viewing of the Point Made Films' documentary "Adopted." The showing was organized by a Korean adoptive parenting group (Korea Focus) and our local FCC (Families with Children from China) organization. The film, produced in 2003, has proven controversial.The majority of the footage focuses on an adult adoptee, Jen Fero, a 32-year-old Korean-born woman who was adopted and raised in a small Oregon town in the late '70s and '80s by a loving Euro American family. Jen describes in painful detail her long struggles with the loss of her birth family, her connection with her adoptive family, her tenuous sense of belonging.She raises a number of blunt, difficult questions not only for her own adoptive parents but for all adoptive parents, particularly those with children of differing racial backgrounds:

• Can white adoptive parents overcome their own losses and vulnerabilities in order to acknowledge and embrace the whole child—her race, her birth country, her birth family—including the painful loss of that first family?

• Are white adoptive parents willing to stretch beyond their comfort zones and help children of color navigate life as minorities in a predominantly white world?

The trailer shows Jen trying to explain her struggles to her mother, who in the film battles a terminal illness.

Jen's story is enough to keep any parent of a transracially adopted child awake—long into the night. To be fair, I’m guessing Jen's parents followed the accepted beliefs of their generation. Once you adopted, you treated your child as if she or he were—and had always been—your own. Love and acceptance trumped dislocation or difference. To acknowledge the rift or difference threatened the fantasy that the bond could be re-made, perfect and whole.

Thirty years ago, families didn’t discuss abandonment, adoption, or race. Korean adult adoptees like Jen continue to teach us the price of this denial.

As difficult as it was to watch, "Adopted" heightened my own awareness. As an adoptive parent to a child of a different race—my daughter was born in China—an essential part of my job is to acknowledge and address the challenges that come with being a mixed-race family.

Thankfully, in my wanderings and search to learn more, I've also come across another video that offers both insight and inspiration. Judy and Aaron Stigger's story is a different take on the transracial conundrum, one with a far happier outcome. That's not to discount Jen Fero's story. But Aaron Stigger's perspective on his dual identity makes me smile and gives me hope.

This four-minute video was originally aired on MSNBC in October 2008 as part of "Growing Up Black in a White Family." [Correction made 10/26/09.] It was then posted by Adoption Learning Partners (ALP), an educational organization whose primary goal is to have a "positive measurable impact on adoption outcomes." ALP offers a variety of web-based courses for adoptive parents and professionals, but there's also a wealth of free information and other resources if you dig about on its site and "Community" page.

I love the message that adoptive mother and son offer in this video. Perhaps just as important as what they say is their body language, which reveals the clear, easy affection between Judy and Aaron Stigger.

Judy, by the way, was one of ALP's founders (which officially makes me a fan.)

In the on-air interview, Judy shares one of the ways she used to respond to the classically intrusive comments adoptive families so often encounter: "People would say, 'Do you have any real children?'" She'd turn to Aaron and say, "No, I just have this plastic one."

Aaron, playing along, would hold out his arms and sing, "Ta-da!"

Judy taught her son by example, defusing an otherwise potentially awkward moment with humor while also communicating the idiocy of the question. Aaron describes his memories of growing up, of not wanting to stick out, not wanting to be different. He says he appreciated the opportunities he had to make friends with other kids and people of color.

This prompts Steve Inskeep to turn to Judy and ask how much thought she put into transracial parenting. Judy credits one experience with her daughter (also adopted, also biracial) as being an ah-ha moment:

"When she was about eight, we spread across the bed all the congratulations cards we'd gotten when we adopted her, because now she could read them. And then she looked at me and just got this pain wash across her face [sic], and said, 'Mom, was I supposed to be white?' And I looked at the cards and realized every one of them had a little white baby face on it. And it struck me that this parenting business wasn't going to be about not being prejudiced. It was going to be about being inclusive."

In time, Judy began sending holiday cards to family and friends featuring people of color. One day, her daughter received an Easter card from Judy's mother. Her daughter took the card up to her room to read it in private—but returned, flying down the stairs, holding the card out in front of her for her mother to see. The card showed a risen Christ, black, muscled, with dreadlocks. Judy's daughter declared, "My grandma loves me!"

Further on in the interview, Judy describes another moment of heightened awareness. She’d gone to attend one of Aaron's performances when he was part of a black theater group his freshman year in college. Walking into the theater, Judy realized she was one of the few white people in the audience. She realized how she stuck out, how exposed she felt—and then she thought this is how her children must feel, as minorities, living, moving, and breathing in a predominantly white world.

At this point in the interview, Aaron can't jump in fast enough. He explains, eagerly, emphatically, that this is an issue for all transracially adopted kids—for that matter, for all minorities.

"Thank you! Thank you!" He exhales. "That right there needs to be on every program nationwide!"

The message from both Judy and Aaron is that no child growing up likes or wants to be different. Children of color need friends, neighbors, and role models of color, both in their immediate world and in the imagery that surrounds them. As white parents with children of color, we need to support them, to be as inclusive as we can. We can't limit ourselves to the world of white privilege.

As Judy Stigger puts it: "You need to see the world in color."

So, I'm curious: If you're reading this, and you're a white adoptive parent with a child of color—what things do you do to support your child and see the world in color?

This post was adapted from several pieces that originally appeared on the blog Pack of Three.

Introducing a Lucky One 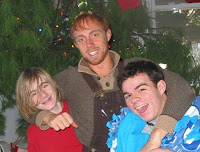 By David Biddle for Adopt-a-tude

I'd like to introduce myself. My name is David Biddle and I will be posting occasionally to Adopt-a-tude. At one time in my life I had a different name. My original name was Anthony Tobias Black. I had that name for about two weeks. It's a great name, but I also like the name David Biddle.

My perspective on adoption will hopefully be somewhat unique here at Adopt-a-tude. I was adopted back in 1958 in Richmond, Indiana. I've got a lot of experience thinking about this adoption thing. For the first 20 years or so of my life I tried to ignore what it meant to me. But beginning in college, gradually, piece by piece, issues and questions that I'd refused to think about began to surface that I couldn't ignore.

My adoption situation was made all the more interesting and poignant because I have tan skin. When I was born, so-called white families weren't interested in me because I was too dark, and so-called black families felt I was too light. The story was that I was mixed race, but no one could tell me the mix or my heritage. Folks don't talk about this kind of thing very much even today, but there are many of us out there who grew up without a clue what our DNA is composed of. In the end I wasn't adopted by white or black people. I was adopted by nice people. I love my parents Bruce and Ellen Biddle. And they loved me.

Finally, I am one of those lucky ones you read about every so often. At the age of 45 and with the help of my wife and kids, we went looking for my birth mother. I needed to know what my heritage is. Most importantly, I needed my sons to know what their heritage is. By luck, I was born in Ohio, a state that allows adoptees to petition for their original birth certificate. Once I received that I at least had my birth mother's maiden name -- and my first name, Anthony Tobias Black.

We left our home in Philadelphia, Pennsylvania in August of 2002, found our way to Richmond, Indiana where I'd been adopted, and did the classic town hall research thing looking at marriage records, birth records, divorce records.

I am one of the lucky ones because I found my birth mother. She is successful in life, happy, and above all was overjoyed to finally meet me. At the age of 18 she'd been forced to give me up for adoption. We have had a growing relationship now for more than seven years. I've visited for extended periods with my family twice now and I know my story. It's good enough to be a book, that story, which I've written and am now trying to get published. I have three half-brothers as well. The oldest of them and I get along like, well, brothers. It's very weird.

I hope, then, to bring to this web log a lifelong practitioner's perspective on what it's like to be adopted. You're adopted all your life, not just when you're living with your parents. And the idea of adoption and being adopted changes and morphs over time. I don't think I had an intellectual thought about my adoption until I had my own kids (see the photo). One has red hair and green eyes; another brown hair and brown eyes; and the youngest is blond with blue eyes. I think I felt like an orphan in the world until these three guys came along. I think a lot of adoptees feel like orphans in one way or another, but we work hard to ignore this. It's cool to be an orphan though these days. Harry Potter is an orphan. So was Batman, Superman, Cinderella, and Tom Sawyer. (If you have any other examples of orphans, let us know in the comments section).

The story of moving from being an orphan to being loved and part of a family can make every adoptee strong, well-adjusted, and a force to be reckoned with in the world. Each of us is different of course. I can only give you my experience and my perspective. Hopefully it will be useful or at least entertaining. If you're curious about anything, don't be afraid to ask. I love answering people's questions. I don't think I belong there, but I really believe there should be an Adoption Hall of Fame. I'd put my birth mother in there for sure. I'd put my mom in too. She was absolutely the greatest mom anyone could ever have. If any of you are interested in this concept, get back to me. I've got no money, but a lot of ideas.

Thanks for reading.
Posted by David Biddle at 12:02 PM 3 comments: